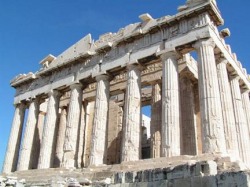 Ancient Greece.com - This site has tons of useful information on the various aspects of Ancient Greek society.

BBC Primary History: Ancient Greeks - a fantastic Ancient Greece site with resources, loads of info, a forum for discussion, and so much more!

Perseus Digital Library - a digital library with thousands of texts, photos, and more!

Alexander the Great - all about the life of Alexander!

PBS: The Greeks - a fantastic site with an interactive timeline, the Acropolis experience, the making of the Greeks, educational resources, and even a shop!

The Trial of Socrates - all about the trial and execution of Socrates, one of the world's greatest philosophers.

Introduction to Greek Mythology - all about the Greek gods.